Elon Musk is not the only visionary that saw the future in electric cars. Before Elon and Tesla there was visionary tycoon William C. Whitney, who was the owner of the Electric Vehicle Company, which designed and built electric powered automobiles for his taxi cab company. Not only that, but this happened two centuries ago, on May 14, 1899!

On that day, a 26 year old cab driver named Jacob German was arrested in New York City for speeding. And what was his offending speed you ask – he was charged with doing the blistering speed of 12 MPH in an 8 MPH zone!

Although this seems ridiculous today, back in 1899 and even though the early 1900’s streets were not solely for the operation of motor vehicles. Back then, there was no such thing as jaywalking. Streets were used by horse drawn carriages and bicycles. Streets were places where people strolled and kids played. In fact, in the early days when cars became more common there was an epidemic of children being killed in pedestrian accidents, and for a time the automobile was vilified as a killing machine.

The story of Jacob German’s historic arrest doesn’t end there. We must ask, who was this intrepid police officer who made this historic arrest, and how did he come to develop the evidence against our unfortunate pre-uber driver operating such a technological marvel? This is the stuff of lore. You see, there was another first in this story. Mr. German, the very first person ever arrested for speeding in the United States, was arrested in the first speed trap!

Having no radars, speedometers, or other speed measuring devices, the police had to come up with another way to measure speed of a vehicle. Enter one officer John Schuessler of the NYPD bicycle squad, the predecessor to the NYPD’s famed highway and motorcycle patrol unit. By the time of his 1899 speeding arrest, Officer Schuessler was already a legend. An undated New York Times Article details Officer Schuessler’s exploits:

“He is 27 years of age, weight 180 lbs., height 5’11 1/2″ tall…Schuessler figured in many rescues, captures of runaways, and other events, more than any other member of the force…”

Some of those exploits include single handedly chasing and capturing a spooked horse “owned by Mr. Quackenbush,” that had thrown the occupants of the carriage and smashed the buggy to pieces. The struggle to control the horse led to Officer Schuessler suffering two fractured ribs and a badly bruised back which required 5 weeks of bedrest. In another capture of a spooked horse at Columbus Circle, Officer Schuessler was injured when the horse slammed him into the monument. The article also credited Officer Schuessler with saving the lives of two children and an adult from a building fire in December of 1896. 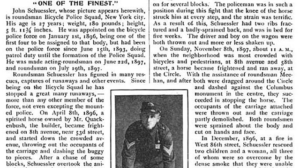 All of this horse wrangling and life saving aside, Officer Schuessler really loved to catch speeding bicyclists. It was his thing. He was so feared in biking circles that he was known as “The Scorcher’s Terror.” But, how to know whom is in violation of the 8 MPH speed limit?

Back in 1899, the traffic ticket was already in use in England, but had yet to be in use in the United States. Officer Schuessler made a custodial arrest, and Jacob German spend the night in jail. This was big news of the day, as the New York Times published an article about the arrest:

The moral of the story: so long as there have been cars and cops there have been speeding and speed traps. When you get caught speeding, be grateful that the cops now just give out tickets. And call us – we can help!

Michael Palumbo devised a plan to bring affordable, skilled legal representation to all drivers. His firm charges one low flat fee, not a high up front fee and additional fees for hearings and trials. Their representation is so hassle free that you never have to take time off from work to go to court or even come to their office. They offer a money back guarantee in most cases if they don’t reduce or eliminate the points from what you are charged.

These are just a few of the ways Michael Palumbo works on your behalf. Give them a call now at their toll free number 877-996-6849 for a free phone consultation.